Established in 1929, Hideaway Lodge was the first licensed camp on Clearwater (Burditt) Lake. Originally the only way to get onto the Clearwater/Pipestone chain, our driveway served as a portage; the spot where our old woodshed stood served as a horse barn to carry canoes, motors, lumber, and supplies for anyone heading up the lake.

Over the years, the various owners accumulated two outpost cabins, one on Pipestone, and one on lower Manitou. The Pipestone outpost still belongs to Hideaway Lodge, but the Manitou Outpost was sold off. We acquired the West Jackfish outpost in 1999. There are no more original buildings left on the property, though part of Cabin 2 once served as a shower/laundry room. The prettiest spot on the lake with a natural sand beach, Hideaway Lodge is still a great place to spend your Canadian holiday even after all these years!

Hideaway Lodge has been a favorite destination for Northwestern Ontario fishing enthusiasts for over 80 years. Join us on Clearwater Lake to see why!

Seeing is believing- check out our photos! Browse Gallery 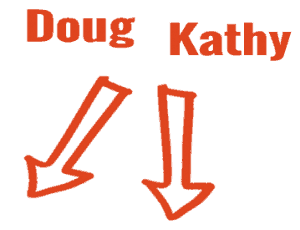 Believe it or not, we grew up about 7 miles apart on the prairies just outside of Winnipeg, Manitoba. We married in July 25,  1992 and signed papers to purchase Hideaway Lodge on August 1, 1992.

The Lodge had been closed down for two seasons when we bought it, but that didn’t stop these two stubborn Norwegians! After both growing up on farms, working in the Northwestern Ontario fishing industry and owning a fishing camp was something we had to learn on the fly. The learning curve was steep, but twenty-four years later, we’re still at it. Since 1992 we have rebuilt 80% of Hideaway Lodge and amassed a fleet of boats, piles of fishing gear, and loads of stories.

We work hard all summer but still manage to squeeze in a few pontoon rides, shore lunches, and fishing days. In the off season, we love to travel and have learned a lot about the tourism industry on our journeys. It seems we were made to be camp owners, as we love entertaining, cooking, campfires, remodeling, and pontooning. And of course, we couldn’t call ourselves Canadian if we didn’t love the NHL and curling.

Our families have played a huge role in our success. Doug’s brother and his family (Randy, Cisca, Jessica, and Kristen) and Kathy’s parents (George and Frances) have been our loyal supporters. In both high times and low times, they are only a phone call away. Sadly, we have lost Randy and George, but the girls are still very active volunteers! Our children Tara, Bryan, and Jennifer were raised on the lake and come back to Hideaway as often as they can- usually with spouses and friends in tow. Somehow, the kids get older but we seem to act younger and younger…

Click HERE to send us the best shots from your Hideaway trip!

Tell Us How We Did